The Sand Canyon-Castle Rock Community Archaeological Project is conducted in the central Mesa Verde region of southwestern Colorado, in three canyons: lower and central parts of Sand Canyon, East Fork of Rock Creek Canyon and Graveyard Canyon. In these canyons there are remains of several dozen Ancestral Pueblo culture small habitation sites including well-preserved cliff dwellings with sandstone architecture preserved up to second story, isolated towers, kilns, refugee sites, as well as one large site or the community centre – Castle Rock Pueblo (Site 5MT1825). All these sites possibly functioned as a community of allied sites connected with different kind of ties during the thirteenth century A.D. In the second half of the thirteenth century most settlements were located in defensible places with limited accessibility and near water sources such as springs. There were also worsening climatic and environmental conditions, such as long-term droughts. All canyons under the investigations of the project are part of the Canyons of the Ancients National Monument, a legally protected area managed by the US Bureau of Land Management. This project is being conducted by the Institute of Archaeology, Jagiellonian University in Krakow, Poland in cooperation with the American institutions Crow Canyon Archaeological Center and the Canyons of the Ancients National Monument, Colorado. The project director is Dr. Radosław Palonka and from the beginning, the US Consulate General in Krakow has also been a partner of the project.

Figure 1. Project research area (marked with no. 1) within the Canyons of the Ancients National Monument, southwestern Colorado investigated by the Sand Canyon-Castle Rock Community Archaeological Project (drawing by CANM and Michał Znamirowski).

There are also many examples of pre-Hispanic Pueblo rock art (both petroglyphs and paintings) depicting fighting warriors, human-stick figures, a flute player, footprints, handprints, bird tracks, plants, and geometric motifs, including mainly spirals and concentric circles, and possibly also historic Navajo petroglyphs. Additionally, several of the sites had plastered walls with painted murals on them with geometric motifs, including dots, zigzags, triangles, and birds. On almost every rock art panel historic inscriptions, named and dates are also present. 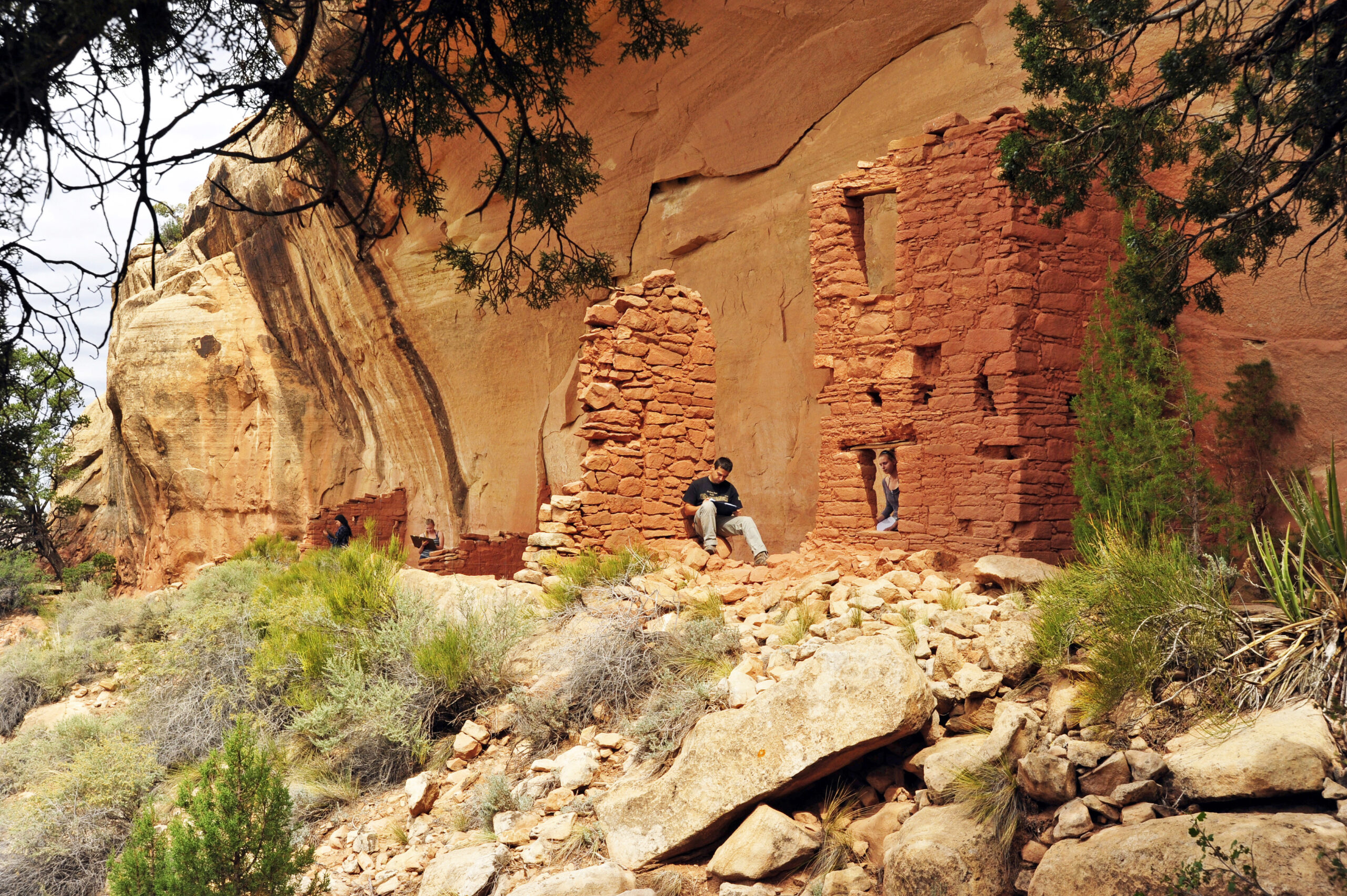 In terms of the methodology, great emphasis has been placed on digitisation and different digital techniques of documentation, including photogrammetry (also photogrammetry from a UAV/drone) and terrestrial laser scanning (TLS), which have allowed us to document the rock art, especially when located in hard-to-access places like cliff alcoves and shelters. Using non-invasive techniques including also geophysics (mainly electrical resistivity and magnetommetry), we have partially or fully surveyed thirty out of around forty of the small Ancient Puebloan sites in the project research area of lower Sand Canyon. Limited excavations were also conducted in several sites in the Monument and in the areas directly attached to it. We consulted in the field rock art and architecture with several American and European scholars as well as representatives of the Hopi tribe, from the Hopi Cultural Preservation Office, Second Mesa, Arizona. 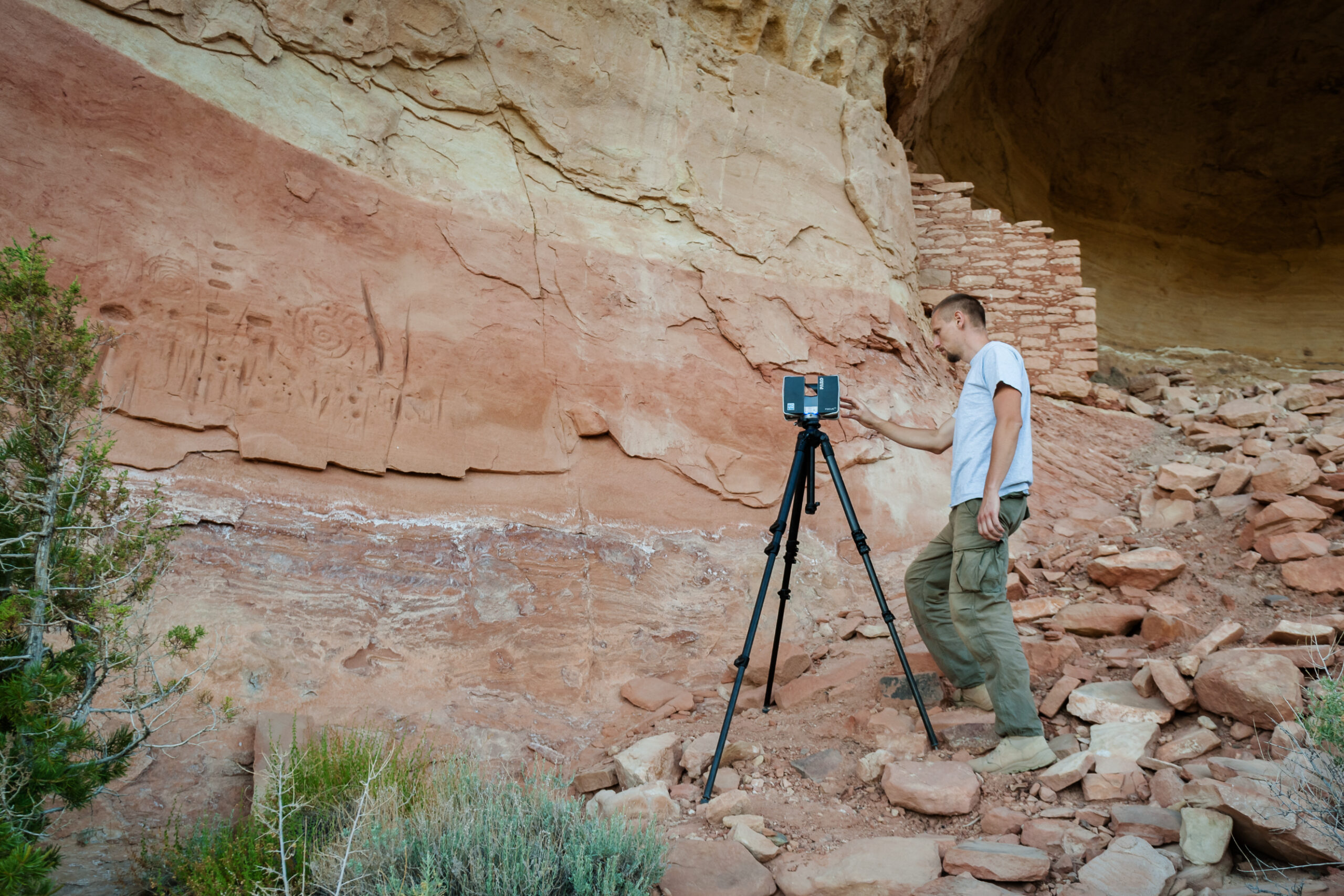 Figure 3. Documentation (by Bolesław Zych) with the laser scanner and subsequent photogrammetry of the Ancestral Pueblo stone architecture and rock art at the Site 5MT129 in Sand Canyon (photo by Michał Znamirowski).

Our research has been conducted since 2011 and by the Department of American Archaeology, Institute of Archaeology at the Jagiellonian University in Kraków (Poland) with the cooperation of American institutions, mainly Canyons of the Ancients National Monument/U.S. Bureau of Land Management and Crow Canyon Archaeological Center, both in Colorado as well as with several scholars from various scientific institutions in US. Our research was made possible mainly by the National Science Centre, Poland (grants UMO-2013/11/D/HS3/01879 and UMO-2017/26/E/ HS3/01174), as well as additional support from the Jagiellonian University in Kraków, U.S. Bureau of Land Management, Crow Canyon Archaeological Center and the U.S. Consulate General in Kraków and several private companies, including Śnieżka-Invest, Polski Cukier-Krajowa Spółka Cukrowa, and international company Air Liquide.